HOLA! It's the Book of the Week!

I recently started volunteering for a great program that runs across the state in Pediatric Doctor's offices. It's called Reach out and Read, and it is an organization that gives books to children as they come in for their yearly checkups, as well as provided story-telling in the lobbies as they wait. This week I read the book Uncle Nacho's Hat to the waiting children, and they loved it!! Especially when I attempted to read the Spanish words....This book is also on Reading is Fundamental's List of "Books children who hate to read LOVE to read," so you know it's a crowd favorite! 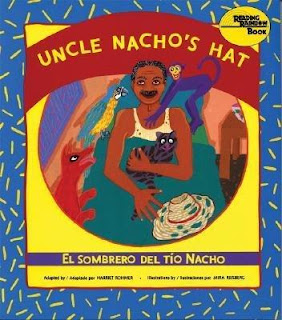 Uncle Nacho's Hat
by: Harriet Rohmer
With text in Spanish and English, this story brings important glimpses of other cultures to American children. The Uncle Nacho story originated in Nicaragua; the other came to Nicaragua from Africa by way of Jamaica. In the first, Nacho is attached to his old hat, even though it is full of holes . When his niece Ambrosia gives him a new one, he's pleased but skeptical. He reluctantly puts the ragged hat in the trash, but thanks to well-meaning relatives and friends, the hat keeps returning to Nacho. Finally he realizes it's time to push himself to change his style, in a clever and involving lesson in acceptance of change. Ages 4-12.
Some great activities to do with this book would be:
1.Have students write a story about a major change in their lives. What was hard about this change. What was good about the change.
2. Make hats out of construction paper, or be creative and think of new ways to make a hat!
3. Gather old clothing together to give to the Salvation Army and explain why people donate clothing to others.
Posted by Megan at 11:48 AM