It is no secret that I love CANDY! I have a serious sweet tooth, and it is insatiable. This year is the first year that I have not received any Halloween candy...(Everyone say, awwww...) and I have been missing my childhood of pillow cases stuffed with sweet goodness. So, in memory of those yummy Dots, scrumptious Tootsie Rolls, and decadent Milk Duds, I wanted to do a post on Candy Children's Books. I am getting cravings right now! 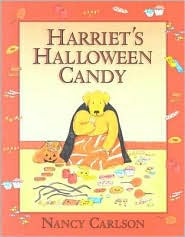 Summary: Harriet learns the hard way that sharing her Halloween candy makes her feel much better than eating it all herself.﻿
The Candy Corn Contest

by: Patricia Reilly Giff﻿
Summary: It's almost Thanksgiving, and Richard Best can't stop thinking about Ms. Rooney's Candy Corn contest. Whoever can guess the exact number of yellow-and-orange candies in the jar on Ms. Roney's desk gets to keep them all. The only problem is Richard has to read a page in a library book for each guess.Smelly Matthew, who sits in front of him, knows they'll never win. "We're the worst readers in the class, " he says. But Richard won't give up. He can already taste those Candy Corns. And before he knows it, he has. Three fat juicy ones.What will Ms. Rooney do when she finds out?
Go get some candy! But don't make yourselves sick! :)
Posted by Megan at 5:03 PM