Happy President's Day!! In honor of today's holiday, President's day, here are some fun books that showcase our Commanders in Chief. 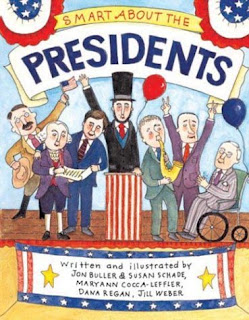 by: Jon Buller, Sally Warner
Summary: Gr. 4-7. From the Smart about History series, this book is similar to other recent titles that quickly delineate the presidents with cartoon-style illustrations and a few fast, fun facts. However, this also presents a paragraph or so of solid information along with the fluff. Students will learn, for example, that Jimmy Carter was humble, honest, and down-to-earth--just what the country needed after Watergate. They will also find out about the taking of the hostages in Iran and that Carter negotiated a treaty between the Egyptians and the Israelis. Each president also gets a few lines about his life before the presidency. All in all, there's a surprising amount of information offered in a kid-friendly style. The artwork is better than average, and although it's played for fun, it's not disrespectful. Different fonts and a peppy layout add appeal. A bibliography, a map showing where the presidents were born, and spreads on White House kids, First Ladies, and more are appended. An easy way to interest kids in the presidency. 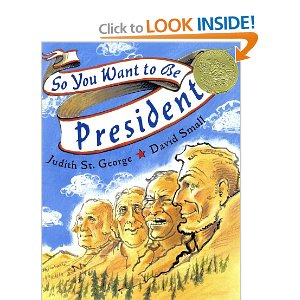 So You Want to be a President?

by: Judith St. George
Summary: Tired of books about the presidency that present themselves as history books? Author Judith St. George--along with Caldecott Honor-winning illustrator David Small--has created a book about the presidency that's serious fun. The basic theme is that anyone can be president: a fat man (William Howard Taft) or a tiny man (James Madison), a relative youngster (Teddy Roosevelt at 42) or oldster (Ronald Reagan at 69). Presidential hobbies, sports, virtues, and vices all get a tongue-in-cheek airing, perfectly matched by Small's political-cartoon style of caricature painting. It's fun, but the underlying purpose is clearly serious: to remind kids that the American presidents have been a motley group of individuals, not a row of marble busts. Ironically, that message makes the presidency far more interesting (and appealing) than it seems in some of the more traditional books. There's a factual addendum at the back giving all the dates and names, with a one-line bio for each past-president. (Ages 8 and older) 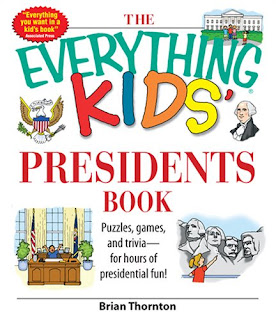 The Everything Kids' Presidents Book Puzzles Games and Trivia - for Hours of Presidential Fun
by: Brian Thornton
Summary: Did George Washington really cut down his father's cherry tree? Who was the last president to have facial hair? Which U.S. president had a country's capital city named after him? Which president earned the nickname, "His Accidency"? With The Everything Kids' Presidents Book, you'll be at the head of your class after learning about the lives, legacies, and impact that our country's 44 leaders had on the history of the United States. Filled with fun facts, trivia, and 30 puzzles, The Everything Kids' Presidents Book introduces you to everyone from our first president, George Washington, to the man currently residing in the White House, George W. Bush. Learning about the people who shaped the history of our country has never been so much fun!
Posted by Megan at 2:15 PM